Create enterprise applications much easier than before

Home/Uncategorized/Create enterprise applications much easier than before

Create enterprise applications much easier than before

With release 5.0 we have published a new version of our low-code platform. Thanks to features such as the What You See Is What You Get (WYSIWYG) editor and the real-time preview (Live Preview), it is now possible to create enterprise applications even more conveniently and at the same time faster than before

You know it all too well – the problems are still the same! Your digitization strategy has been devised a long time ago but the implementation is stalling? You are aware that many processes that are still analogue must be transformed into digital form as quickly as possible, but there are not enough IT specialists to implement these requirements in a timely manner.

But honestly? You are not alone with these problems. All you need is the right platform to support you in this process.

Simplifier helps more than ever

You know that the challenge described above is primarily about applications in your company – a lot of applications. And sticking to our motto: “Enterprise Apps made simple”, you should do exactly that.

Do not wait any longer – just start!

With the changes from release 5.0, Simplifier enables you more than ever to create your required applications even faster, more efficiently and above all more easily.

In this article, we would like to briefly explain the most relevant new features with the highest added value for you and your company. We would like to show you how these new features can help you in your day-to-day business. The advantage: you don’t have to work your way through our complete release notes.

What is the decisive added value from release 5.0?

Not only did we reduce the technical complexity for release 5.0 – it was also important to us to enable everyone to participate in application creation:

People without any coding skills

People with a high level of coding skills

Especially “pro-coders” are often only available only to a limited extent or even too little in companies to cope with the upcoming or already existing requirements in application development. However, it is precisely these requirements that companies depend on when creating applications. Traditional programming is simply slowing down many digitization processes. This often results in time delays in various implementations. So, the question that arises is: Must really evereything still be programmed?

Low-code gives the opportunity to create simple applications much easier and faster than with traditional programming methods –  provided that “everyone” knows how to use the software for app creation in order to build or adapt applications themselves. Of course, the implementation of more complex applications is also possible. Still, the more complex the app, the bigger the need to involve the existing IT specialists (“Pro-Coder”).

Ask yourself the question: Which of the processes within your strategy seem trivial but have an enormous impact?

This is where Simplifier comes into play. The advantage: Both the employees in your specialty departments and the IT professionals are involved and support each other. In this manner, applications are created faster. Unnecessary delays in work processes are avoided. The specialty department experts have the necessary expertise and know the to-be-digitized process. They also have a clear idea of the devices on which they want to run an application and what that should look like. Why not “exploit” this knowledge when creating an app? If those users are classified according to the distinguishing features described above, they are distinguished between “no-coders” and “low-coders”.

And what exactly does this have to do with the new release?

No-coders should possess the ability to design user interfaces. On the basis of a WYSIWYG editor, this is possible via drag & drop function. This is exactly what we have implemented completely for the first time in Release 5.0, making it much easier to design application screens on different devices. In addition, low-coders have already internalized the process logic (BPM – Business Process Management), which they can also assemble on a graphical interface with ready-made elements available for this purpose via drag & drop. These can then easily be “mapped” to the previously created screens. With the new release we have taken a big step towards a “low-code platform for everyone”, especially since these steps are no longer primarily implemented by the specialist developers, but only need to be supported by them if necessary.

In the following, we will explain in detail what you can expect from the new UI Designer and the corresponding live preview and what advantages you will have when using the new DB Designer.

Application creation is simplified in particular by the newly designed UI (User Interface) Designer. It is used to create the user interface of the application. While it had already had plenty of helpful features to make application creation easier (e.g. the real-time collaboration mode), there is now a new highlight that tops all previous ones: The What-You-See-Is-What-You-Get (WYSIWYG) editor. 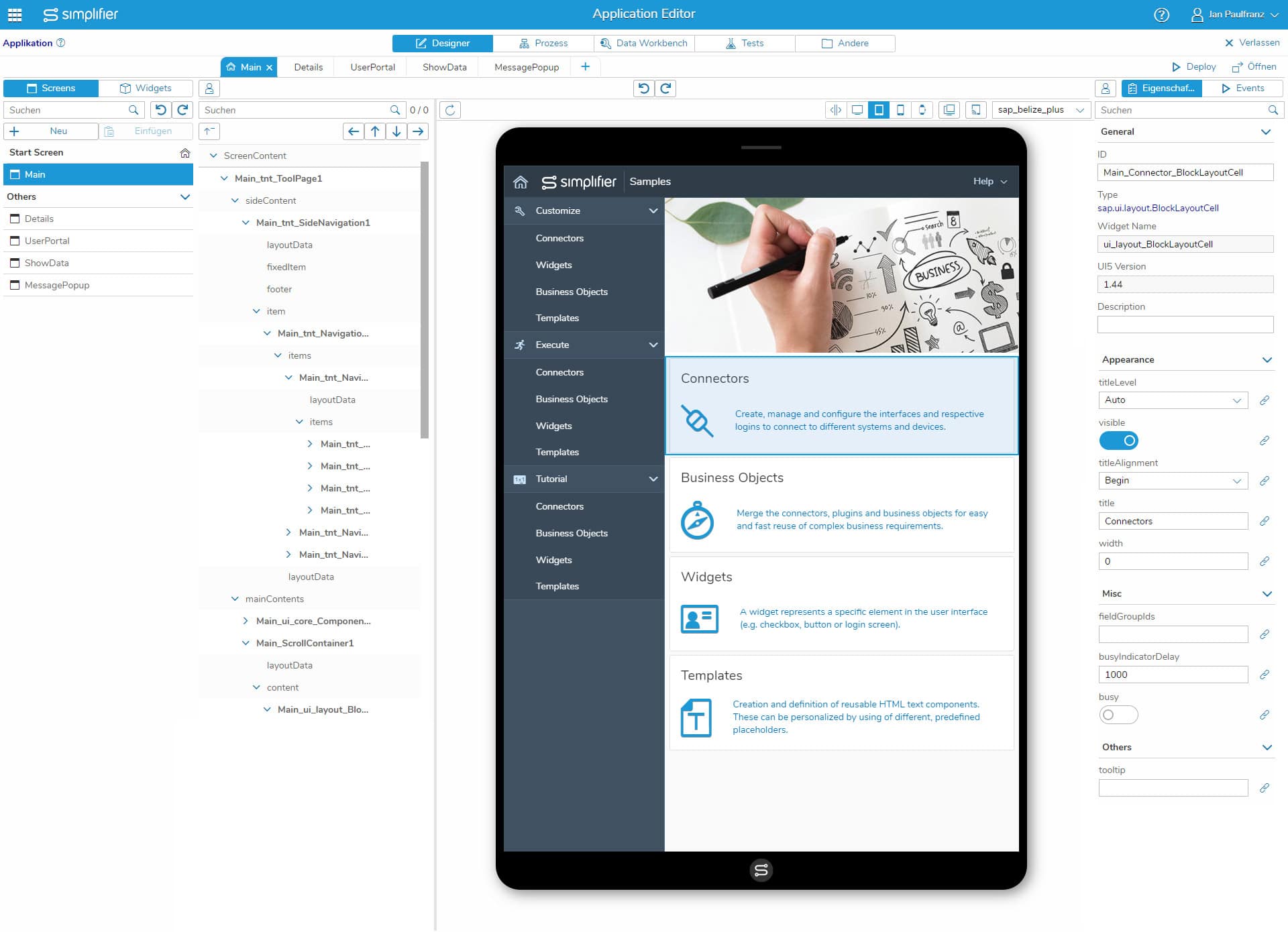 The what? This allows you to drag and drop widgets (= individual elements in the user interface) into the editor. The advantage: changes are displayed directly on the user interface. This saves a lot of time for the application creator because the changes do not have to be implemented individually each time to make them visible.

With only one tool it is therefore possible not only to work on the app idea without disturbance, but also to prepare the app interface directly for use.

Together with the WYSIWYG editor, we offer the Live Preview in our Simplifier Mobile Client. Every change in the user interface is displayed in real-time on the designated mobile devices. The advantage: The layout can be tested (live) on different devices and smartphones as well as tablet models simultaneously. For example, if an application is created for several mobile devices, the parallel preview of all changes on different user interfaces has a huge time saving potential. 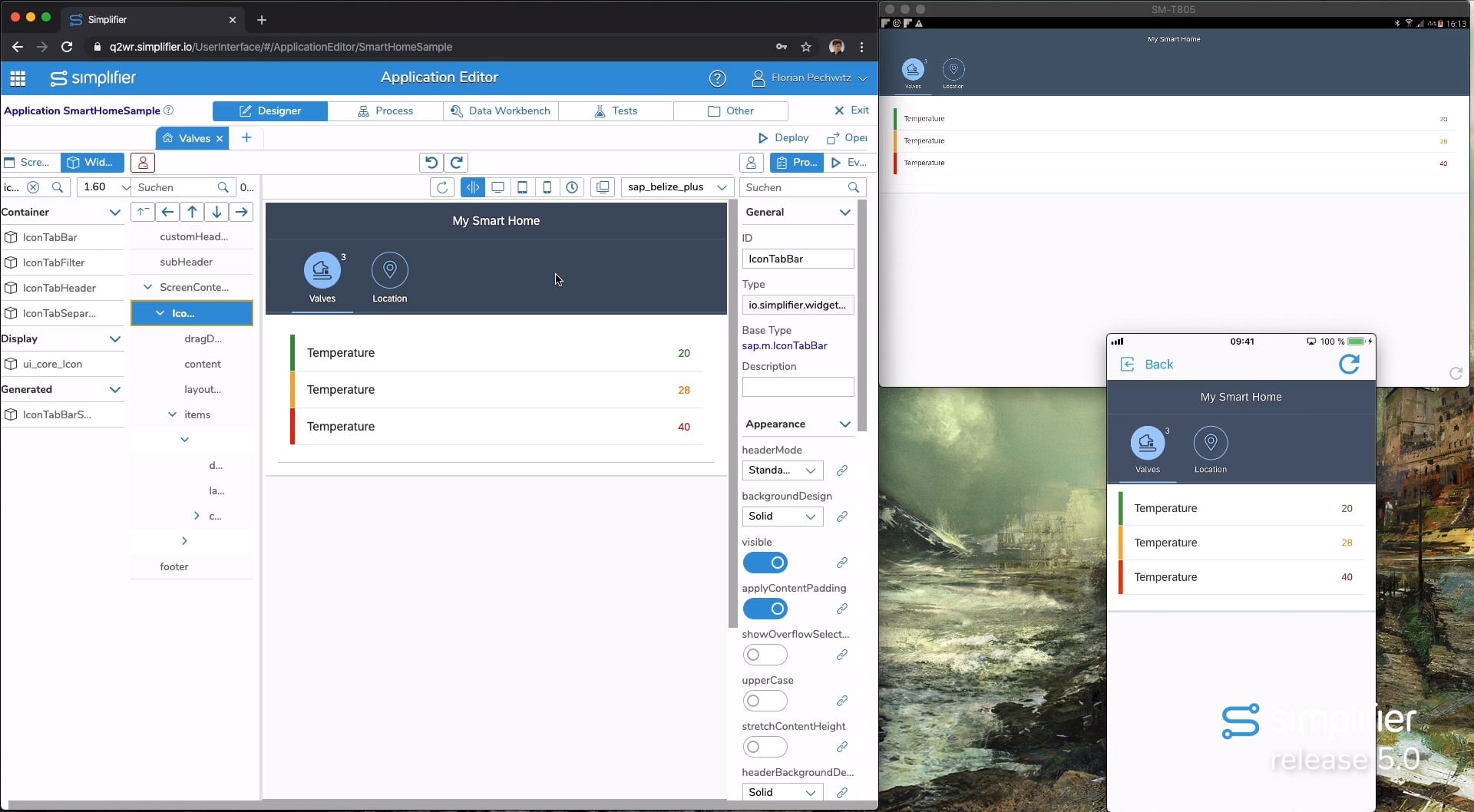 The UI Designer has even more features that help to make application creation even more comfortable.

Invite developers: If there is the possibility to work together with other “developers” on an application, it makes a lot of things easier: The new Share button allows you or your employees to invite other colleagues to work on your current app project (cooperation mode) via e-mail. The advantage: This creates synergy effects, as the application developers support each other in the areas where they can contribute best. This results in an all-round multi-value solution.

Corporate Design: Corporate Design is very important for every company. You can assign your design themes directly to each Simplifier instance. This allows you to use an application on different instances in different corporate designs. The advantage: The separate loading of themes is a thing of the past.

Apart from the UI Designer, there is an innovation that is a great added value for companies. Many applications require databases for optimal data exchange. Creating databases and integrating them into an application is not always as trivial as it sounds, though. Therefore, a special feature is the new Database Designer. It now offers the possibility to create your own databases in Simplifier from scratch using a graphical interface. The advantage: Everything is fully integrated and can be generated with little effort. For users without appropriate database knowledge, this is a simple way to ensure an integrated data exchange between an application and a given data schema.

Release 5.0 makes application creation much more convenient for everyone in your company. Especially the WYSIWYG editor, in combination with the Live Preview, represents an enormous simplification and flexibility, since all application designs are created quickly and adjustments are visible in the preview in real time.

Your specialty departments and your IT will move closer together. All employees from different departments involved in app creation contribute with their personal expertise

Thanks to the new Database Designer, even databases based on a predefined data schema can be generated with little effort and without special database programming knowledge in Release 5.0. These are integrated directly into the application and ensure smooth data exchange.

Many things are therefore even easier, faster, more flexible and more transparent when it comes to creating applications. And ultimately, all of this leads to a shorter time-to-market, faster ROI (return on investment) and thus to more economic success for your company.

Learn how Simplifier can help your business.

You or your developers test our latest release thoroughly.