Simplifier Connectors – What is … CSV?

Home/news/Simplifier Connectors – What is … CSV?

Simplifier Connectors – What is … CSV?

For most developers, the above terms are nothing new. In a broader sense, they all are used to exchange data. But for the normal business user, they sound rather complicated. That’s why we would like to explain the various terms in more detail over the next few weeks.

What is a connector?

A business app often receives its added value through the integration of external data. The direct representation in the app, e. g. when someone makes changes to the database, makes it possible to organize processes more efficiently and avoid redundancies. In order to access external data, the application must be able to communicate with the existing backend systems. This connection between app and data source is created in the Simplifier with Connectors.

It’s all about interfaces!

With Connectors we create interfaces to other systems. The mode of operation is the same for all of them. The Connector itself is like an empty shell. It describes which system you want to address and with the help of Connector Calls, we can address it in a defined way. The big advantage thereby is, that you don’t have to distinguish between the different technologies within the app. Once the Connector and the Calls are created, executing a SOAP request from the app is just as easy as sending emails.

Numerous data sources have already been connected in the Simplifier. Generally, the available Connectors can be divided into two categories.

On the one hand, there are “external” Connectors which are used to connect customer systems. These include:

On the other hand, there are “internal” Connectors. They focus less about reading out external systems but refer to the Simplifier itself. These include:

CSV is a file format with the ending .csv. The acronym stands for Comma-separated-values. Precisely, it is a text format that can be edited and modified with the usual text editors.

The file format is used for exchanging data. Since it is accepted by almost all programs, you can save your data from tables, databases or address books as a .csv file and import it into other programs. 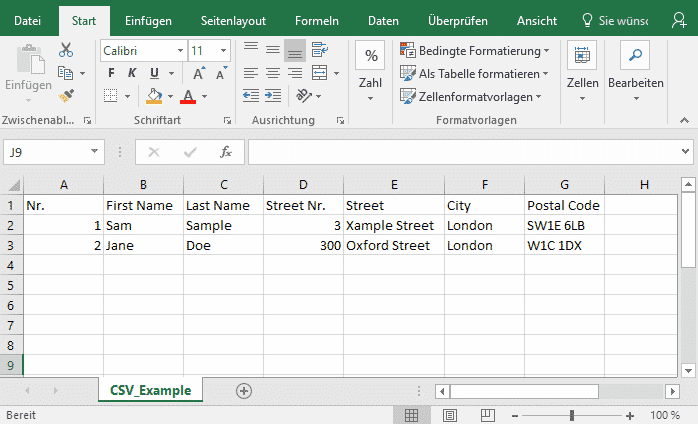 Address records saved as .csv file and opened in the text editor

Structure of a CSV file

The individual items within the CSV file are divided by a separator, e. g. a semicolon. Which separator character is used is not clearly defined, i. e. also a comma, a colon, a blank or any other character can be used.

To separate the individual lines from each other, another character, usually a simple line break, is used.

In addition, so-called field delimiter characters are used, for example if the fields contain special characters or if the text within a field contains a comma. To ensure that the line item is still recognized as one field and that the comma is not confused as a separator, e.g. quotation marks can be placed at the beginning and the end.

Furthermore, the header record (the first record) can be used to define the column names.

Use of CSV files

CSV files are primarily used to exchange data between different programs or systems. Example use cases could be the import of addresses into a new administration program or the import of email addresses (e.g. newsletter subscriber list) to an email system.

How is CSV used with the Simplifier?

In step 1, the Connector shell is created and the general data such as the type of Connector is defined.

In step 2, Connector Calls, which represent the actual actions, e. g. the reading of a CSV file, are added and their input and output parameters are defined.

In step 3, the finished Connector with its Calls is integrated into the app. To do this, you use the activity “Data Object” in the Process Designer.

The following video shows you exactly how to perform the individual steps:

Test the Simplifier for 3 month. Or register for a guided demo so we can answer your questions and show you the basic functions of the Simplifier.